Invasion of the Body Snatchers: “Get Out” and the Everyday Horror Story for Blacks

Hollywood has been producing black horror films for awhile now. The 80s and 90s were replete with films with a horror bent.

1985 gave us “The Color Purple” monster “Mister”, a monster the movie positions as an almost tireless, ageless evil who terrorizes the women around him. Spike Lee pulled off horror twice; 1989’s “Do the Right Thing” felt like an urban “Twilight Zone” tale, where Bed-Stuy had everyone cooking underneath a magnifying glass, the setting gradually slimming down from a neighborhood to a pizza store murder. Two years later, he did 1991’s “Jungle Fever” where everyone was predator and prey, falling for the incurable desire for two white substances: women and crack.

There’s been lighter fare too, but even they have preyed upon psychological fears. Movies like 2014’s “No Good Deed” or 2015’s “The Perfect Guy” might be called thrillers, or 2009’s “Obsessed” another horror masked as thriller all playing different notes on the real-world fears of heterosexual black women finding “a good black man”, and being wary about who you do and don’t let into your home. In real life this has been a horror story for the black community; 1.5 million black men have been swallowed by everyday monsters like imprisonment or murder (Chicago recorded its 700th murder in December) or unemployment; nearly 50% of black men aged 20-24 in Chicago are unemployed. All of these films have origin points that can be traced back to the original horror story of slavery, and its likely why a lot of black people, even as Hollywood has continually held up films like “Birth of a Nation”, “12 Years A Slave” and “Amistad” as works of art, have often talked about avoiding or being weary of these same films. They are too real, too scary, and too relevant.

Now we have “Get Out”, a film by Jordan Peele that’s a welcome reversal on many of these narratives. While on the outside “Get Out” is about many of these same issues—the film touching on everything from the criminal justice, black bodies and the ever-simmering tensions of black-white relations—it’s actually squarely preying on white liberalism, a group that often views itself as harmless when it comes to racism and bigotry. This point comes across in many parts of this movie, which on the surface is about what happens when a young interracial couple, Chris (Daniel Kaluuya) and his girlfriend Rose (Allison Williams), travel to her parents’ home for the weekend.

“Get Out” has several set pieces worth discussing, but the film’s garden party scene might be the most essential, the gathering of Rose’s parents’ friends and acquaintances for an annual get-together in loving memory of her departed grandparents. Earlier Rose’s father offers a popular assurance and validation when he proclaims that not only was Obama the greatest president he’s known, but he would’ve voted for him a third time. As Chris wanders from couple to couple, we want a gauntlet with him that’s likely familiar to plenty of black folks traversing white spaces. There are the soft come-ons about your appearance (“aren’t you a handsome one” one partygoer remarks as she delicately squeezes his arm); the desire to validate blackness as a commodity (“black is in again”, intones another attendee as he curries favor); or as a means of intellectually engaging him, Chris is asked in front of a throng of the white guests to speak on the progress of African-Americans; have things gotten better or worse? As he makes his way through the crowd, you experience a lot with Chris: the exhaustion of literally navigating white spaces; the delicateness and calculations of how you choose to respond to commentary intended to be innocent and well-intentioned but ultimately still steeped in ignorance and, at times, fetishization. 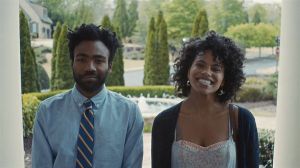 The scene features Lakeith Stanfield, “Darius” from Atlanta and his inclusion in this particular section of the movie serves a couple of purposes. His presence actually evokes a call-back to Atlanta’s “Juneteenth” episode, which in many ways saw the realization of this movie’s social scene. As a collection of Jack-and-Jill styled fanciful black people mingle about the sprawling mansion of a high-minded black woman and her awkwardly liberal white husband who aggressively displays how “down” he is to everyone around him, especially Earn, who the husband likely senses is skeptical about his authenticity. The two parties present inverses of one another; as Earn and Chris both get sized-up, evaluated, chastised and patronized as much for what their blackness is and for what it isn’t, there’s the illusion of a gateway being opened to another world. Atlanta’s “Juneteenth” represents the illusion of a black bourgeois that feels like they’ve “made it” and the implicit message that they, if not have become “white”, have certainly escaped being “black”.

On the other side “Get Out” has a phalanx of white people yearning for the cool side of the pillow of blackness; wanting to retain the power of their whiteness while acquiring aspects of blackness a la carte.

This sort of racial power bartering is the underlying horror at the heart of both pieces, as both make the case that one of the greatest fears of wading too far into a white world is the loss of identity, something made clear with Chris’ relationship, to blacks living in the suburbs, to a change in dress and language, to maintaining a sense of village or community whenever you come across another person of color—that silently telegraphed, telepathic two-word message we transmit in those moments: “you good?”. “Get Out” unearths this uneasiness, neurotically aware of a white culture that’s quick to consume aspects of the black culture, and the movie gets a lot of mileage out of the issue of appropriation as it looks at the most obvious ways that white mainstream culture steals things: entertainers, artists, athletes, and bodies. The black victims in “Get Out” are analogues for all these situations and it’s worthwhile to consider the real world examples and implications when it comes to this sort of continued white theft. There are the obvious ones: Three years ago on an MTV stage, Miley Cyrus, twerked on stage surrounded by black women props; months later, Macklemore wins over Kendrick Lamar at the Grammys.

The movie also adds to the ongoing paranoia about black mobility and identity. Several times in the film, the issue of staying black is a literal and metaphorical dilemma. Chris’ decision to be with Rose, their decision to go to her parents’ house in the bucolic suburbs, and the roles of the landscaper, housekeeper, and Andre (Stanfield) are all familiar echoes about the recurring nightmare of losing your black self in white settings and culture. It’s a familiar question of trespassing and authenticity that shares roots both historical in the “paper bag” tests and passing, and pop cultural, too.

“Get Out” was obviously made decades later, but “Chris” would have been the perfect role for a 90’s-era Will Smith to have played. As an actor whose work during that period often negotiated outing race and class identities in unpredictable spaces, this film would have been a natural inclusion to his resume then. In 1993’s “Six Degrees of Separation”, Smith plays the lead role in the true-story film of a black gay con artist who worms his way into a New York area white high society, by pretending to be the son of “Guess Who’s Coming To Dinner” actor Sidney Poitier, likely in-joke for the con artist and certainly for an audience that gets the messages and paranoia in “Get Out”. 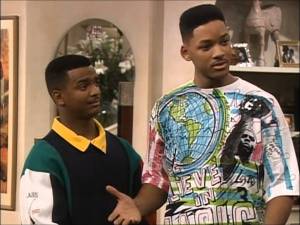 What makes him especially relevant to this film though is his six-year run on “Fresh Prince of Bel-Air” from 1990-1996. The entire series was about Will’s struggle to maintain his particular blackness in a community where he felt everyone around him had already been snatched, from rigid, authoritarian Uncle Phil, to Valley Girl Hillary, Smith navigated a fun house of black misshapen mirrors. The pinnacle was his sometimes foil; Ribero’s “Carlton”, the Tom Jones swaggering, uptight cousin was an everyday mirror that terrified and tortured Will with its galling feeling of whiteface at times. Much of the series positioned Will not only as a fish-out-of-water but an exorcist of sorts, too; constantly using his values, his culture, and his body to wake up the Banks family. To Will, his family wasn’t just strange; they appeared to be brainwashed and inadvertently, the show took on this racial dilemma too, body-swapping the darker-skinned Janet Hubert-Whitten’s “Vivian Banks” for the fairer-skinned Daphne Maxwell Reid midway through the series to play the same character. That sort of swapping set-off age-old concerns and injustices around the penalties of being black in issues that “Get Out” also provokes discussion about: colorism, opportunity, mobility, and acceptance. Smith’s first movie after the “Fresh Prince” was 1997’s “Men in Black”; a sci-fi action series where he and Tommy Lee Jones took on cases to reveal the true identity of people living amongst us by using a device armed with a flash.

Yet our most complex example of this negotiation and the vampire-like nature might be the ongoing vexing saga of Rachel Dolezal, whose presence and journey serves as an embodiment of the angst, anger, and anxiety that “Get Out” is about. In Rachel, there’s everything ranging from appropriation to passing, privilege to theft, politics to intimacy. Her decision to identify as a black woman is steeped in a racially political American context that has a sordid history around whites finding ways to comfortably and conveniently adapt blackness as it suits them. Her own story is one of continued consumption; from altering her appearance, to her academic and career decisions, to most recently, her official name change: she is now “Nkechi Amare Diallo”. It’s Nigerian in origin. Her story is an example of both how true life is stranger than fiction and also how art imitates life.

Both Diallo and “Get Out” tread into the uneasy way we mine our racial traumas into devices and identities, becoming keys to get to the other side. Catherine Keener puts Chris under by first empathizing with and then manipulating his emotional trauma around a very personal loss, and the tumble to the sunken place becomes something Atlanta, “Jungle Fever”, Rachel/Nkechi, Kanye, “Do the Right Thing” and even the currently running Kalief Browder documentary “Time” all share in common: when you tumble into that dark space, no one can hear you scream.